On Saturday, October 31, Professor Rudolf Zahradník, one of the most important figures of Czech science, died at the age of 92. He helped usher in the era of quantum chemistry in Czechoslovakia, served as the first president of the Czech Academy of Sciences, and cofounded the Learned Society of the Czech Republic. He authored more than three hundred scientific articles and was a teacher to many of today’s leading scientists, including some of IOCB Prague’s most respected researchers. The following are their remembrances.

(This is a translation from the Czech original.)

I was in Colorado when Zdeněk Havlas informed me that Professor Rudolf Zahradník had died only a few hours earlier. And it had been only a handful of days since his wonderful wife, Milena, had also passed away. I could not imagine one without the other. I would always visit both of them, or at least speak with them on the phone, during my monthly stays in Prague, and I am going to miss that very much now.

I had the remarkably good fortune to have known Rudolf as an outstanding teacher and doctoral supervisor and a fantastic coworker. The most important thing of all in my scientific and personal life, however, was the example he set for me with his extraordinarily cultivated personality. His straightforward, honest, and stubbornly courageous character allowed him to endure difficult times with a smile on his face and soon earned him a great many friends and admirers in the scientific world.

His talent, originality, devotion to science, self-discipline, judgement, and industriousness helped him make many achievements both in science and in the organization of science. He made history. He was and will continue to be a role model to young people, and he lived, happily married and in good health, to a ripe old age. What more could one ask for?

Prof. Josef Michl, Distinguished Emeritus and head of a research group at IOCB Prague and the University of Colorado, Boulder (USA)

We first met in 1967. I was a student at the Faculty of Technical and Nuclear Physics at the Czech Technical University, and I had just discovered that I did not enjoy studying interactions of atoms but rather interactions of molecules. Rudolf sat me down in his office, and our first discussion was long and very helpful to me because it had a fundamental impact on my subsequent scientific career. I devoted both my thesis and my dissertation to a subject that Rudolf chose for me – noncovalent interactions.

Together, we published dozens of papers and three books, and to this day my team and I continue to pursue the subject. Choosing a timeless subject that will remain relevant for another fifty years takes a great deal of scientific foresight. That would be my first remembrance of Rudolf.

The second one dates to the beginning of the 1970s, the most rigid period of normalization. It was a time of despair and communist despotism. Most of the great scientists had emigrated, which only intensified the feeling of despair. Regardless of attractive offers from abroad, Rudolf stayed in Prague, and it was thanks to him that we were able to cope with the circumstances of the time. We were a group of enthusiastic students and young researchers. We dedicated all our time to science and were doing quite well. We owe Rudolf a debt of gratitude for the fact that we got through those difficult years and were able to do some meaningful and good science.

My third memory is a personal one. Throughout my career, I have met many outstanding scientists, but only a few of them were also caring moral authorities. I had the good fortune to meet two extraordinary people who shaped my life: Camille Sandorfy of Université de Montréal and Rudolf Zahradník from Prague.

It was the beginning of the 1970s, and at the Charles University science faculty, there was a new lecture called “Chemical Constitution”. The lecturer was Associate Professor Zahradník, and he immediately captivated all of us, not just the women. It was an entirely new field, today known as quantum chemistry, and he spoke with such passion that I knew then and there that was the future for me.

And then that charismatic personality, brimming with persuasiveness, swept us all away. Thank goodness he was not the only amazing lecturer like that in the period following 1968. It is a pity that the gradual process of normalization was robbing us of the best teachers. Rudolf, too, was identified as an unacceptable teacher with a negative influence on students and was recalled from the lecture after only one semester.

He did, however, stay on as a researcher at the Institute of Physical Chemistry of the Czechoslovak Academy of Sciences. I gathered up my courage and asked him if he would supervise my thesis. And when he agreed, my elation knew no end. But it was not all that easy – Rudolf was not allowed to be an official supervisor even at the Academy of Sciences.

Of the many research topics he had, I had chosen to do my thesis on intermolecular interactions, so the role of supervisor was taken by a member of his team, another scientist who had already been tossed out of the Academy, Pavel Hobza…

Dr. Zdeněk Havlas, Vice President of the Czech Academy of Sciences, Honorary Chair and head of a research group at IOCB Prague

It is with a considerable dose of sentiment that I recall my first meeting with Rudolf Zahradník at the Heyrovský Institute of Physical Chemistry at the very end of 1988. I had been sent to see Rudolf by my thesis supervisor, Luboš Skála, to consult with him on a tricky matter from quantum chemistry. The problem was that at the given time, I was babysitting our six-week-old son Tomáš, because my wife, Ivka, was taking an exam at the Czech Technical University. So, I went to see Rudolf, who I’d never met before, with little Tomáš strapped to my chest in a carrier and, as was my custom at the time, wearing a stretched-out sweater and scuffed-up tennis shoes, not to mention my greasy long hair.

The door to the office at the Heyrovský Institute was opened for me by perfect gentleman with neatly combed gray hair and wearing a perfectly fitting suit with a perfect tie. In an instant, he looked me over, but he did not even blink; he only called out to his secretary: “Růženka, Mr. Jungwirth is here. Give him a hand please, make him some coffee, and try to entertain the child for a bit.”

I felt like I was in the famous movie Casablanca, the closing scene where Humphrey Bogart, as an anti-Nazi resistance fighter, says to the French captain: “I think this is the beginning of a beautiful friendship.”

The rest, from my subsequent postgraduate studies under Rudolf’s enlightened guidance and the inspiring internships with his Swiss colleagues to the wonderfully chatty evening with Angela Merkel to celebrate his ninetieth birthday, is now history.

Rudolf, I will never forget how, by your example, you showed me that being a zealous scientist does not have to mean being an asocial nutcase. Please look down upon us from your quantum chemistry heaven with your kind and understanding smile, which we would otherwise miss so very much!

(Source: The Learned Society of the Czech Republic)

Prof. Pavel Jungwirth, Distinguished Chair and head of a research group at IOCB Prague, President of the Learned Society of the Czech Republic Enzymatic synthesis of hypermodified DNA
A team of researchers, led by Michal Hocek with Marek Ondruš as the first author, described in the journal Nucleic Acids Research the development of an approach for the enzymatic…
Continue reading 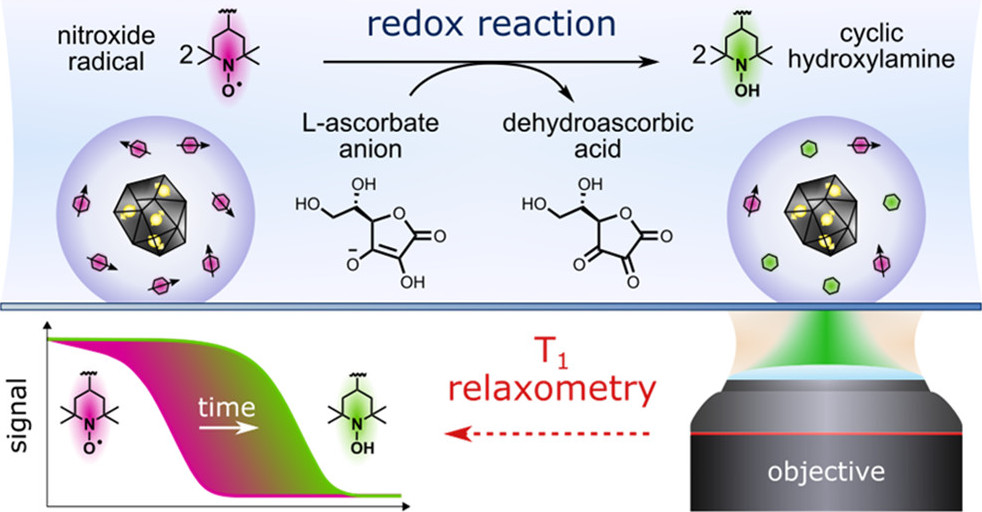 Ultrasensitive nanoprobes for detection of chemical redox processes
Redox reactions play a fundamental role in maintaining metabolic and other processes in living cells. For a better understanding of these processes, researchers are working to…
Continue reading